Weekly Fundamental US Stocks Forecast: Time to Buy the Dip for Year-End Rally

Weekly Fundamental US Stocks Forecast: Time to Buy the Dip for Year-End Rally

The end of November and beginning of December is typically one of the best times of the year for US stocks. The Santa Claus rally nears. 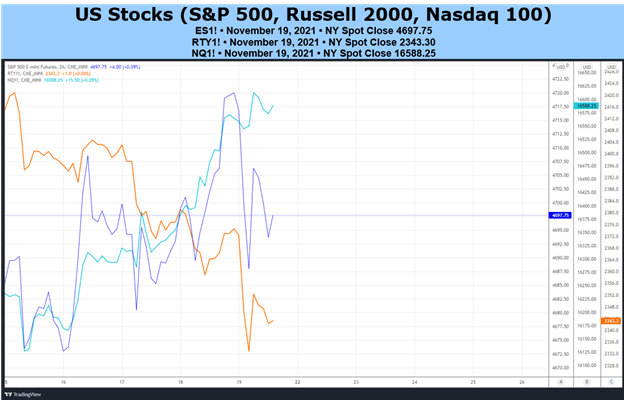 US STOCKS WEEK IN REVIEW

It was a mixed week for US equity markets, a typical occurrence at this time of the year. The US S&P 500 added a mere +0.35%, while the tech-heavy US Nasdaq 100 gained +2.36%, and the small-cap focused US Russell 2000 lost -2.80%. While November has been the best month of the year for US stocks in recent memory, it just so happens that the middle two weeks of the month tend to produce sideways/consolidative price action.

For traders who have been embracing the ‘buy the dip’ mentality, it may be the case that now that the November options expiry is in the rearview mirror, the all-clear signal has been given.

The week of the Thanksgiving holiday in the United States as well as the following week have historically produced robust gains for US equity markets, in what is the beginning of the colloquial period known as the ‘Santa Claus rally.’

Seasonality studies going back 20-years show that the final two weeks of November, coupled with the start of December, mark the period of the year when US equity markets tend to rally the most aggressively, per data gathered from EquityClock.com. 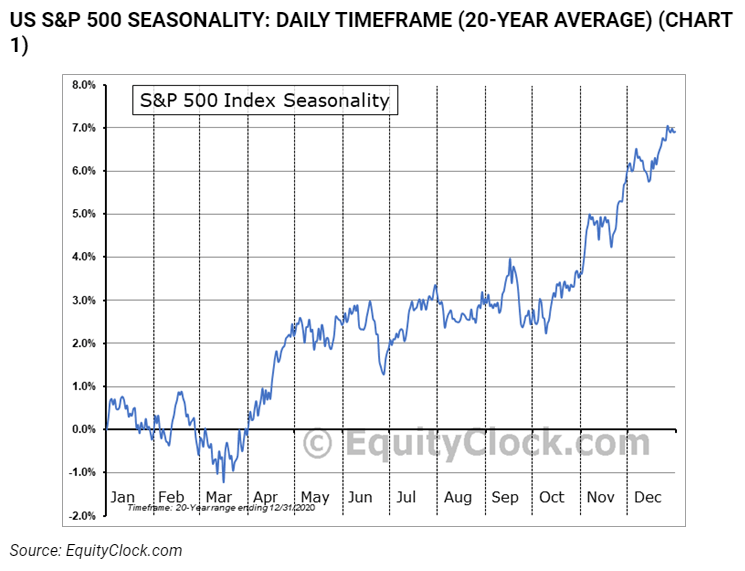 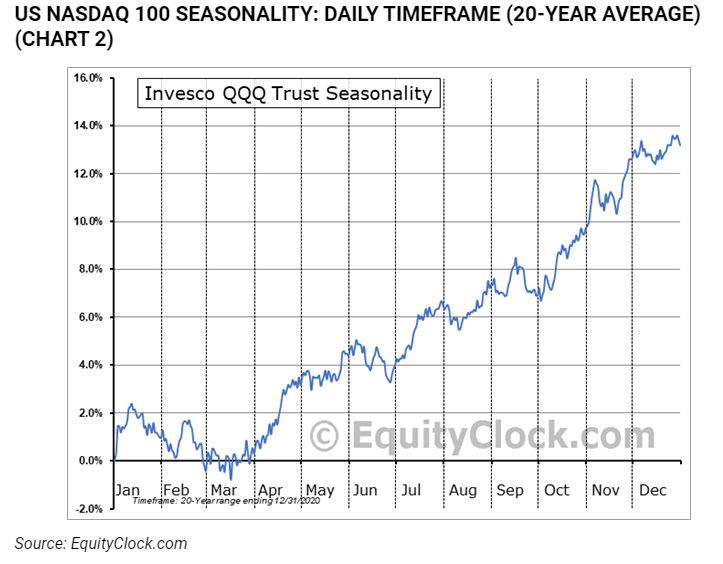 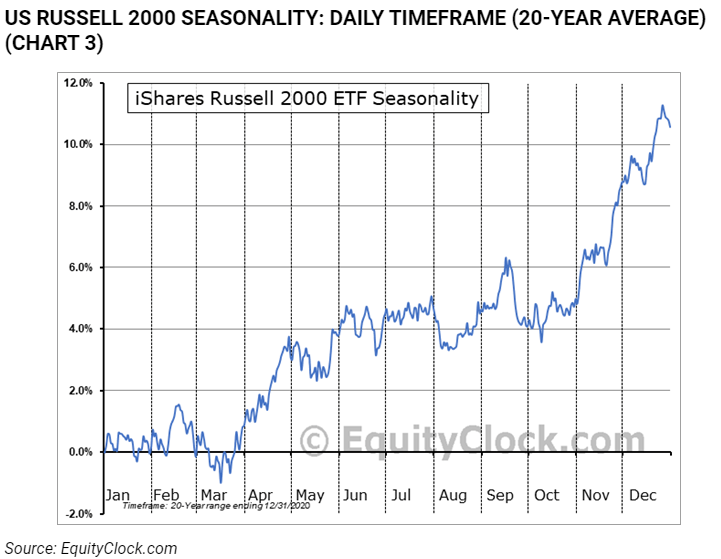 With US real GDP tracking above +8% annualized in 4Q’21 per the Atlanta Fed GDPNow growth tracker, as well as a continued robust corporate earnings environment per guidance issued in the most recent round of earnings reports, there are good reasons to believe that the next leg higher in US stock markets is around the corner.

It’s no surprise that the truncated Thanksgiving holiday week will see a reduced economic calendar. Importantly, US equity markets are closed on Thursday, while Friday will see a limited session with markets closing at 13 EST/18 GMT.

- On Monday, November 22, the October US Chicago Fed national activity index will be released ahead of the cash equity open, while October US existing home sales will be made public 30-minutes after trading begins.

- On Tuesday, November 23, the November US Markit manufacturing PMI flash will be reported 15-minutes after the cash equity open.

- On Wednesday, November 24, there is a data deluge as reporting agencies are closed thereafter in recognition of the Thanksgiving holiday. Ahead of the cash equity open, weekly US MBA mortgage applications and weekly US jobless claims figures will be released, as will the October US durable goods orders report, the second estimate for 3Q’21 US GDP, and the October US trade balance. 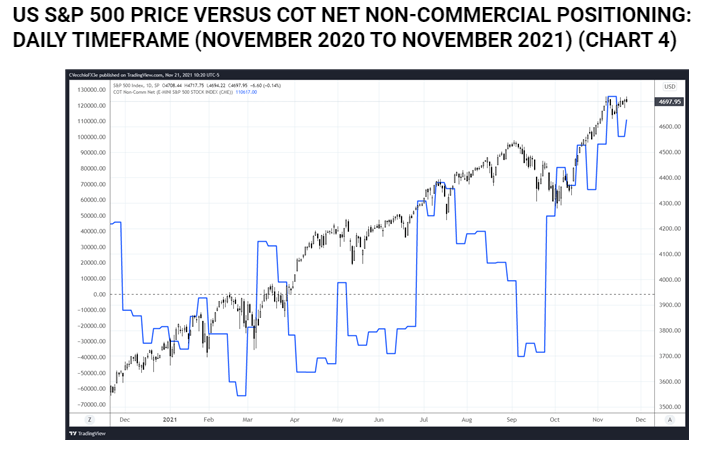 Next, a look at positioning in the futures market. According to the CFTC’s COT data, for the week ended November 16, speculators increased their net-long US S&P 500 futures positions to 110,617 contracts, up from the 100,245 net-long contracts held in the week prior. The futures market is holding near 52-week highs established three weeks ago. 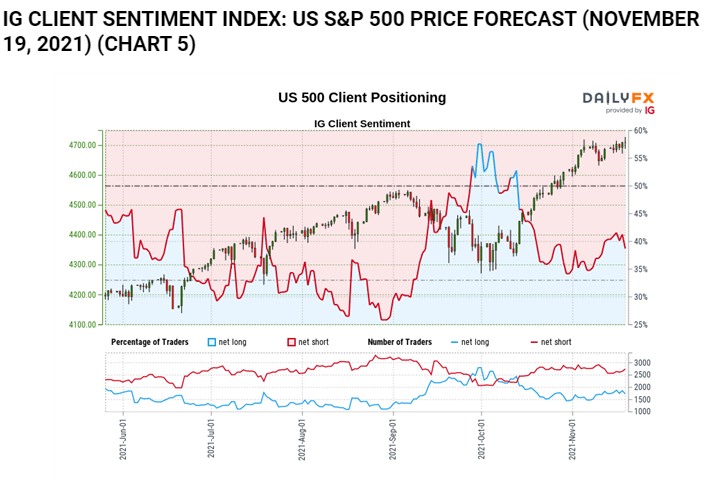 We typically take a contrarian view to crowd sentiment, and the fact traders are net-short suggests US 500 prices may continue to rise.

Traders are further net-short than yesterday and last week, and the combination of current sentiment and recent changes gives us a stronger US 500-bullish contrarian trading bias.

FX Week Ahead - Top 5 Events: UK Jobs Report; US Retail Sales; Inflation Data from Canada, the Eurozone, and the UK

Inflation pressures are no longer being dismissed as transitory by markets, which means three of the four inflation reports due this week have a high likelihood of producing volatility in markets.

What News Moves the Market?

Rumors started to swirl concerning the nomination for the next Federal Reserve Chairperson a little over a week ago.* Would President Biden nominate the current Fed Chair Jerome Powell for another term, or would he go to the more dovish Democrat Lael Brainard?

Forex Trading: How to Get Started

The foreign exchange market can be as vast as that of equities. With more than 150 currencies in circulation, there are enough single names to fill almost two Nasdaq indexes worth of components.