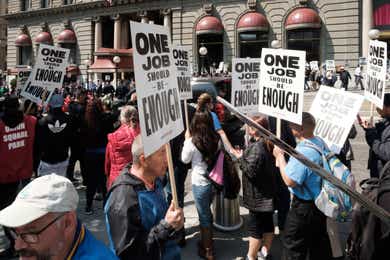 Listen, for better or worse we have adopted a Modern Monetary approach in this country. When we need money for things like banking crises or pandemics, we dole out however much cash we feel is necessary without concern for how we’ll pay for it. It’s essentially indiscriminate spending. But when we’re not in the throws of a crisis, spending comes to a standstill and how we’ll fund projects takes center stage.

In the corporate world, a similar approach reigns supreme. Thanks to ultra low interest rates, companies can essentially borrow money for free. How they’ll actually pay off that debt is the forgotten part of the conversation when the debt itself is financing stock buybacks and increasing share prices. However, the suggestion of using that same money to increase pay for those who need it most; those who can’t afford to buy the company stock to begin, is anathema to those in charge.

There’s an existential struggle in this country between getting things done and paying for them. At the national level, except in times of crises, politicians have to justify how a project will be funded. At a corporate level, it’s a struggle between management and unions. In both cases, the focus ends up being about the cost, not the investment.

Infrastructure spending is no less important or needed than bank bailouts or pandemic spending. We can debate what constitutes infrastructure, but there are some areas universally agreed upon, like roads, bridges, highways, railroads, etc. Do we have to pay people to do that work? Yes. But the money being paid circulates back into the economy. The projects they work on help increase economic efficiency. We don’t have to raise income taxes to pay for that work anymore than we need to raise income taxes to pay for pandemic spending.

Unions are viewed through the same faulty lens. If labor wasn’t seen as a cost to begin and instead considered an investment in human capital, there wouldn’t be a need for workers to organize in the first place. If the same value were placed on investing in workers as is placed on stock buybacks, the wealth disparity plaguing our country wouldn’t be nearly as egregious as it is.

Listen people, scoot closer to your screen so you can hear me. C’mon, don’t be shy. Let’s get real for a minute. There are real, honest to goodness costs in life. Things we spend money on simply to exist, entertain or pass the time are costs. Then there are investments. Investments are anything that offer a return. Infrastructure spending is an investment. Laborers are an investment. Costs are when we have to bail out AIG because they got too cute for their own good. Costs are CEOs, paid based on stock performance, who then solely focus on increasing share value at the expense of the people who keep the company productive. Unions are not the problem. Taxes are not the problem. The people in charge who weaponize taxes, demonize unions and abuse their power, that’s the problem.