Has the stock market crashed? Tune into this week's Truth or Skepticism to hear what Tom and Dylan have to say.
WATCH THE EPISODE 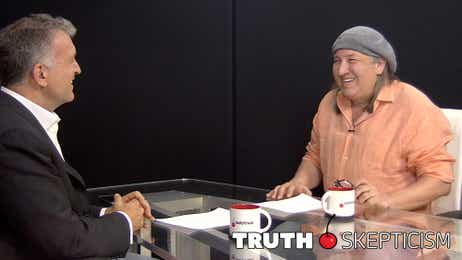 Last time they met, Dylan had a hop in his step. Equities were in the midst of a strong rally giving passive investing some credibility, at least to the less informed. But like a brown bear under a deck, Tom sat patiently, waiting. With the market pulling back recently, this time it was Tom with a hop in his, err, step.

We are in the heart of earnings season. Companies like Apple and Netflix disappointed investors and subsequently, their stocks fell precipitously. On the other hand, companies like Facebook and Amazon have been handsomely rewarded for exceeding expectations. Dylan, still an apprentice, was looking for trading ideas in the wake of such large price gyrations.

For Tom, the answer is simple: short Amazon and Facebook, get long Apple and Netflix. True contrarians buck the trend. Sell into strength, buy into weakness. That is the tastytrade way.

tastytraders know volatility overstates expected moves in underlying assets. When leadership stocks sell off hard, volatility ticks up causing premium to become rich. Tom takes advantage by selling puts to get long. He might be able to give up meat, but not rich premium.

The thought process is the same when stocks skyrocket. As assets move higher, volatility contracts. Selling premium in low volatility is less appealing. Therefore, to get short, Tom looks to strategies like buying a put spread or buying a calendar spread.

Markets have been somewhat manic this year. January and February saw a sharp selloff. March and April saw an equally sharp rally. Bonds have more or less sustained their rally throughout. From a trader’s perspective, Dylan wanted to know if Tom has ever seen a comparable market.

Tom has suggested several times he thinks the market will end the year +/- 5% from 2015’s end. While he could not recall a time markets began the year this way, the moves up and down essentially negate one another, furthering Tom’s belief where markets will end 2016.

The best opportunity in Tom’s mind right now is not necessarily in stocks. Tom believes the best opportunity is in shorting bonds. In fact, if there were one position he wishes everyone had it is short bonds. Juxtaposed against the risk in stocks, the bond bubble scares Tom more.

Dylan’s homework? Long Apple and Netflix. Short Amazon and Facebook. And really short bonds. He has two weeks to complete his assignment.

For more on this topic see:
Changing Our Understanding of Risk | Truth or Skepticism - April 29, 2016