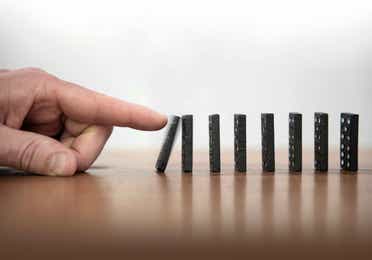 For as long as markets have existed, financial engineers have worked to create products that create leverage allowing both customers and institutions to make more money by taking more risk. 99% of the time, it’s a very good thing. For example, mortgages are leveraged products that allow people to buy homes they otherwise couldn’t afford. Property is pledged as collateral in exchange for a loan to buy the property. Pledging of collateral in exchange for loans is perhaps the oldest form or leverage to exist. But what happens when the collateral loses its value?

In 2008, we saw what can happen when property loses value and loan amounts exceed property values. That problem was only exacerbated by the collateralized debt instruments banks created. The entire world’s financial system was brought to its knees. In 2022, there is a potentially similar problem. However, in this instance the risk stems from Russian stocks and property pledged as collateral in exchange for loans.

Sanctions on Russia caused the Ruble to lose more than half its value at one point. How far it will fall remains to be seen. When a currency is devalued like that, not only does everything begin to cost more (inflation), but anything tied to that currency loses value. Case in point, Russian stocks and property. The same stocks and property put up in exchange for loans from banks in places like, say, Europe.

Let’s look at a relatively simplistic example to illustrate our point. Assume a bank only has one customer and accepted five million Rubles from that customer in exchange for a one million U.S. dollar loan. Take it a step further (because these things are always more complicated than they appear) and imagine that same bank turned around and pledged those Rubles to a bank in Vietnam (you can really choose your own adventure here) as collateral against Vietnamese commercial paper. Suddenly overnight the Ruble loses half its value. The Vietnamese bank calls the European bank saying it needs more collateral against the commercial paper, but the European bank doesn’t have more money. So they call their customer for more money against his/her loan, but the five million Rubles was all they had. Are you picturing one of those incredibly long domino chains yet? No? Watch this…

Because the customer has no more money, the European bank demands the customer return the loan. However, that customer used the loan to buy a house in St. Petersburg which has lost half its value. And now we’re off to the races.

Even if they sold their house now, the most they could get is half what they paid. The bank, strapped for more money, forces a sale of the home. The customer gives all the proceeds to the European bank, who then turns around and gives the Vietnamese bank those same proceeds. However, it’s still not enough. So the Vietnamese bank forces the European bank to sell the commercial paper. That pushes down the value of the commercial paper below what the bank paid. Those funds are then given back to the Vietnamese bank. The original investor has now lost everything and still owes money. The European bank, which still owes the difference between what they paid for the paper and where they sold it, has lost everything. And the Vietnamese bank has, at a minimum, taken a loss on their loan (but the reverberation of this likely extends well beyond those three parties). Confused?

An interconnected financial system has a ton of benefits. However, it also is susceptible to some vulnerabilities. Risk management systems are implemented to protect against most potential situations. But not too many people had Russia invading Ukraine on their bingo card until very recently.

Whether this results in a catastrophic shock to the entire financial system remains to be seen. Hopefully, the situation in Ukraine ends simply for humanitarian reasons. The longer it carries on is not only devastating for humanity, but could also increase risk to financial markets.

How out of hand can the price tag at the pump get and what can you do about high crude oil prices? Learn how to short crude oil.

What assets are most impacted by Russia's invasion of Ukraine?

War, What Is It Good For?

When it comes to the first conventional European war of the 21st century, at an economic level the biggest winner may prove to be cryptocurrency.

The response by the EU and the US to the Russian invasion of Ukraine escalated dramatically and a currency crisis has begun for the Russian Ruble.