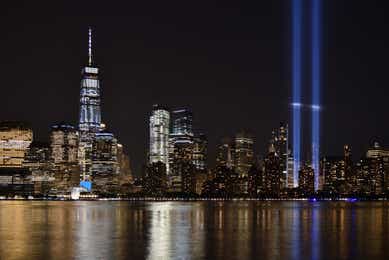 Sometimes, there are no words adequate enough. There’s a process for these weekly notes. After the Truth or Skepticism podcast, we talk about the topic for the weekly note. We write something up, send it back and forth for additions, subtractions, revisions or edits. The style relies on metaphors, references to something nostalgic and then we try adding a dash of humor. But when you’re dealing with the anniversary of September 11th, there are no metaphors and there is nothing funny about it.

Very few people remember September 10th, 2001, but most know exactly where they were the next day. Shock, trauma and fear was a shared experience. The degree to which we each felt those emotions varied. It was most traumatic for those who lost friends and loved ones. Arguably, the next group most affected were rescue workers sifting through the rubble. Then there was the rest of the world who watched in horror, but mostly from a relatively safe distance. The world changed for some. For others, life as they knew it ended.

Most remember the way the country rallied and people really took care of one another. Twenty years later, things have changed. It’s hard to believe anyone would argue we’re a better country today than we were in 2001. We’re certainly more divided politically and quicker to dismiss others that don’t agree with us. It’s probably fair to say we lack closure with the events of 9/11. A twenty year war which ended with a chaotic withdrawal from Afghanistan reopened wounds that never truly healed.

What it’s like to be a survivor of 9/11 or to have lost a friend or loved one is something most can’t quite comprehend. Imagining the dread each year as September rolls around is unimaginable. The majority of us are lucky we don’t know that pain. However, we do have an obligation to those who lost the most.

On this 20th anniversary, maybe we can remember a country that came together in support of one another. A country that didn’t debate viruses, vaccines, masks, abortion, or anything else for that matter. Instead, let’s take a weekend and check on our parents, children and friends. Let’s recognize the fragility of life and how quickly it can change. We can get back to arguing on Sunday, the issues dividing us will still be there. For one day though, let’s just take a break from the current vitriol and honor those who didn’t ask to be a part of a world-changing event, but were at the center of it nonetheless. That doesn’t seem like too much to ask.