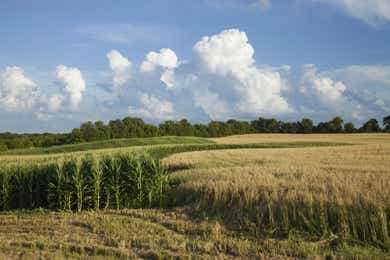 No matter where you’re from in the United States, or anywhere else in the world, virtually everyone on earth conjures an instant mental association when hearing the words "wheat" and "corn."

Whether it be the box of Wheaties you grew up eating or the creamed corn served at Thanksgiving, these two agricultural staples are referenced almost daily in popular culture. And for good reason, as wheat and corn together help fuel a good portion of life on earth on any given day.

Due to their intertwined relationship with human civilization, it shouldn't come as much of a surprise that wheat and corn also have a long history in the financial industry.

Corn is one of the earliest products to be traded on a futures exchange, having debuted at the Chicago Board of Trade in 1851. Wheat, along with oats, followed not long after.

Due to their long history and widespread prevalence, wheat and corn are also a couple of the highest volume futures contracts traded on any given day. Whether it be farmers hedging their upcoming harvest, or speculators trading inefficiencies in the market, the futures markets for wheat and corn are some of the most liquid on earth.

For traders looking for more information on wheat and corn futures, a recent episode of Closing the Gap: Futures Edition is a great place to start. On the show, information relating to the nuances of trading each of these agricultural commodities is presented, as well as a sample spread trade involving the two.

Before getting into the details of the spread, let's first consider some high-level specs for both wheat and corn futures.

Looking at recent price charts for wheat and corn, one can see that the value of both has tumbled since July.

When trading wheat, corn, or any other agricultural commodity, it's important to understand the factors that can affect price movement and trends.

At a high level, weather is a big factor in agricultural commodities due to its effect on any given harvest. For example, extremely hot weather, or drought-like conditions can lower the yield of a particular crop, which in turn impacts supply.

Fluctuations in demand can also obviously affect price. Wheat is primarily used as food, so economic conditions around the world contribute to the demand for wheat. Corn, on the other hand, is primarily used to feed animals, and as a component of ethanol. The varying demand for ethanol, which is often mixed with gasoline, can, therefore, impact the price of corn.

Another key aspect of trading agricultural futures is an understanding of the crop marketing year - a topic that is covered in the aforementioned episode of Closing the Gap. At a high level, this involves tracking when a crop is planted and when it is expected to be harvested. Because this often occurs across two different calendar years, the crop marketing year can help track actual planting and harvesting.

For example, the wheat marketing year runs from June 1st of a given year through the end of May in the next year. Wheat also has two planting seasons, spring and winter. "Spring wheat" is planted in April and then harvested in late summer (the same calendar year). "Winter wheat" is planted in fall, goes through a dormant stage in the cold months, and then is harvested in late spring and early summer (spans two calendar years).

Corn, on the other hand, has one primary growing season (the same calendar year), As you may already know, corn is typically planted in spring and harvested in late summer - much like spring wheat.

While many factors are often considered when speculating in agricultural futures (weather, demand, crop marketing year, etc...), spread opportunities can also be identified that exploit a price relationship between two different futures products, or in different maturities of the same underlying future.

On this episode of Closing the Gap: Futures Edition, the hypothetical process of identifying and executing a spread trade using wheat and corn futures is presented.

In this case, the Closing the Gap team uses the historical price relationship between wheat and corn to identify a possible opportunity. As detailed above, the price of wheat has dropped to a greater degree than the price of corn since the height of summer. It’s this development which has presented a potential opportunity.

The chart below illustrates the spread between wheat and corn prices over the last couple of years. Using this information, we can observe the range of the relationship between the prices of the two commodities:

As you can see in the graphic above, the price difference between wheat and corn (price of wheat - price of corn = price difference) has ranged between roughly $0.70 to $1.80 in the last couple years.

Theoretically, a spread between the two futures might look attractive to traders at either extreme in the range.

In order to potentially capitalize on this situation, the Closing the Gap team outlined a sample trade that got long wheat futures, and short corn futures. This particular structure benefits when wheat prices rally to a greater degree than corn prices, or when corn prices decrease at a faster pace than wheat prices (i.e. the spread widens).

Because this post was written more than a month after the deployment of this hypothetical trade, it’s possible to check-in on the current performance of the spread. Currently, wheat is trading ~$4.60/bushel, while corn is trading ~$3.52/bushel. That means the price difference between the two has widened to $1.08, which is a $0.33 improvement from the levels at which the trade was deployed.

While the current price levels in both commodities may not offer an attractive spread opportunity, this episode of Closing the Gap: Futures Edition can help traders better understand how to build a futures trading assumption.

We also encourage you to follow up with any comments or questions in the space below, or by contacting us directly at support@tastytrade.com.