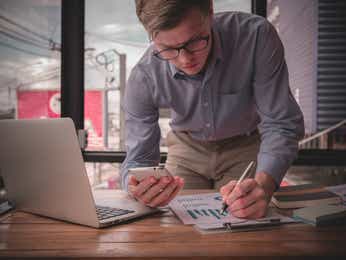 While there's plenty of machines out there trading the market (i.e. black boxes and the like), most tastytraders are old fashioned skin and bones - at least in terms of internal components.

And while the machines may possess some advantages, we humans do too - especially the ability to adapt quickly and learn from our mistakes. For this reason, reflecting on previous trading periods can be a prudent enterprise, in terms of tweaking our mindset or approach going forward.

While not every options trader embraces portfolio hedging, a new episode of Market Measures focusing on this topic is well worth a few moments of your time. Information presented on the show highlights the potential benefit of portfolio hedging through the lens of last year's market correction.

The concept of portfolio hedging is somewhat similar to the delta-neutral philosophy, which involves hedging a given options position "flat delta," using the underlying stock. Those that embrace delta-neutral trading are typically seeking to reduce directional exposure (i.e. risk) in the portfolio, while pursuing the true goal of volatility trading - mean reversion.

The main difference is that delta-neutral hedging usually occurs at the symbol level, while beta-weighted hedging is deployed at the portfolio level (i.e. hedging the net beta of the overall portfolio). Theoretically, traders could also adopt a hybrid approach that incorporates elements of both.

As outlined on Market Measures, beta-weighted portfolio hedging allows a trader to approximate delta risk across multiple positions, and then estimate an appropriate hedge for the entire portfolio using an index (preferably one that is highly correlated to the underlying positions in question). For example, if our portfolio was long 500 deltas (according to beta-weighting), then 500 short SPY deltas could theoretically be deployed to reduce that directional risk.

Because underlying prices in the portfolio are constantly moving, that also means that the beta risk of the portfolio must be monitored, in case adjustments are needed. This is similar to trading delta-neutral, which requires ongoing adjustments, as well.

In order to provide further context on the impact of beta-weighted hedging, the Market Measures team designed a study that involved a sample portfolio of five different symbols with a short put deployed in each.

In order to shed light on the utility of beta-hedging, the time period examined in the study encompassed the 25% selloff observed in SPY during the last quarter of 2018. The symbols included in the study were AAPL, IBM, XOM, JNJ, and GS, with a 30-delta short put deployed in each right before the correction started.

The beta-weighted delta of each position (which is computed and available on the tastyworks platform), was as follows:

Combing the beta-weighted deltas of each symbol above, we arrive at the sum of 90 - which is the number of SPY deltas that were sold against the portfolio in the "hedged" scenario backtest. The second scenario (unhedged) included only a short put in each of the five symbols, without the short SPY overlay hedge.

If you want to look at how the beta-weighted hedge performed over a longer period of time, this added perspective is presented on a follow-up episode of Market Measures, which effectively serves as “Part 2” on the topic. The first episode focuses on a specific window in time when markets were “correcting,” while the second episode takes a step back and looks at the performance of portfolio hedging over a much longer period.

The intent of this information is to give traders a better idea of how beta-weighted hedging can not only affect portfolio P/L, but also the volatility of P/L.

If you are looking to learn more on this topic, we recommend reviewing several previous tastytrade features which are also dedicated to hedging. A previous episode from the Abstract Applications series provides great perspective on how traders can manage their portfolios using a "range" of delta-neutrality.

Additionally, a previous blog post explored the "P/L Ramifications of Trading Delta Neutral" explores how the delta-neutral trading approach can affect P/L at the position level.

This information, in sum, should help traders better understand the impact of hedging, and whether or not they want to utilize it (and to what degree) going forward. Hedging, whether it be delta-neutral or beta-weighted, can be deployed fully, partially, or not at all - so traders have a lot of choices in how they choose to approach this tactic in the risk management toolbelt.

If you have any questions about trading delta neutral, or beta-weighted portfolio hedging, don’t hesitate to follow-up on Twitter (@tastytrade) or by sending an email (support@tastytrade.com).