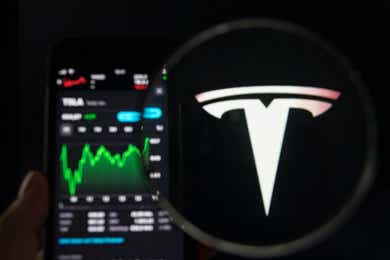 Can Tesla Stock Hit New All Time Highs in 2022?

Can Tesla Stock Hit New All Time Highs in 2022?

Tesla (TSLA) has spent the last 14 days (about 2 weeks) rallying from $700.00 and is currently trading above $800.00 this morning. Tesla's current Implied Volatility Rank (IVR) according to the tastyworks calculation is 47.2. The current Implied Volatility for the monthly options expiring in April and May is 69.0% with an expected move of +/-124.37 and 71.2% with an expected move of +/-182.12, respectively, as of this morning.

Technically speaking, Tesla (TSLA) remains in a bear trend since its all-time high in November of 2021, recording lower-lows and lower-highs during the period. A breakout in price below $700.00 will likely show us a continued bear trend through Q2 and Q3 of 2022. A bullish breakout in price above the psychologically important $1,000.00 price level, followed by a breakout above the all-time high price of $1243.49, will likely indicate a bull trend that could be analogous to the strong rallies we have seen in Tesla’s past.

What makes Tesla (TSLA) stand out from the crowd?

Tesla (TSLA) continues to sell their vehicles directly to the consumer via their Tesla dealerships and directly from their webpage. Whether you are a fan of Tesla CEO Elon Musk or not, he has shown over the last five-year period that his approach and his products are in demand and made available in ways the consumer wants.

How does Tesla (TSLA) compare technically with its competitors?

Tesla (TSLA) is currently the sixth largest component of the SPDR S&P 500 ETF Trust (SPY) with a holding percentage of 1.93%. Figure 2 helps to illustrate that since Tesla (TSLA) makes up a relatively substantial portion of the SPY ETF, we can predict that the price of SPY is correlated to the value of Tesla’s percentage gains and losses over the same period.

Interestingly, Figure 4 shows us that even though Tesla (TSLA) and Ford (F) compete in the same markets globally, the correlation between the two often approaches zero, followed by spikes in correlation. This graph can help us infer information about how Tesla differs from Ford in their business practices.

It is reasonable to assume that since the correlation between the two often approaches zero, the market is pricing Tesla (TSLA) and Ford (F) based on factors that separate their competitive behaviors. At the same time, we can infer that the large spikes in correlation between the two are based on factors that affect automakers in general. For example, cost of materials or consumer behavior.

This data illustrates for us two conflicting scenarios that make for volatile price behavior and incredible trading opportunities. As much as the market might want to think of Tesla (TSLA) as an outlier in the world of electric vehicle manufacturing, it is still worth considering that its price is subject to market forces that affect the entire automotive industry and electric vehicle manufacturers.

Conversely, Tesla’s (TSLA) periods of low-to-inverse correlation with its direct competitor Ford (F) helps us understand that the market understands the differences between Tesla, Ford, and General Motors and prices their stock accordingly based on sentiment, often taking the price of Tesla in an uncorrelated direction, to find a price that better represents its relationship to its competitors.

It is reasonable to assume that because we see these divergences in price correlation between Tesla (TSLA) and its direct competitor Ford (F), the price of TSLA will likely see price swings in to trading ranges that are yet to be discovered.

It is also likely that Tesla (TSLA) has yet to reach its full potential in manufacturing output and consumption by the consumer. If that is true, we can predict larger valuations from Tesla as well as from its competitors, as the electric vehicle market continues to evolve.

Tesla’s (TSLA) 2021 return is currently sitting at 57%. Discover how the option markets project the expected magnitude of movement for Tesla in 2022.