Article 16 deals with issues related to trade between Great Britain and Northern Ireland. The protocol, which is a part of the EU-UK withdrawal agreement, prevents a return of a north-south trade border on the island of Ireland. As a result of the protocol, Northern Ireland has remained in the EU’s single market for goods and therefore, the UK is required to apply regulatory checks on select goods moving from GB to NI, protecting the integrity of the EU’s single market.

On Article 16, this is a safeguard measure, which states that if the protocol leads to serious “economic, societal or environmental difficulties that are liable to persist or to diversion of trade” then the UK or EU can take unilateral action to limit the aspect of the protocol at fault.

Back in July, the UK issued a command paper, setting out its proposed changes to the NI protocol. In the paper, it stated that the protocol in its current form was causing serious economic and societal difficulties as well as creating a diversion of trade and thus provides justification for the UK to invoke Article 16.

AREAS THAT THE UK WISH TO CHANGE

The UK wish to reduce the number of checks and the number of goods that require checks between Northern Ireland and Great Britain. Now while the EU has shown a willingness to compromise on this, the biggest area for contention is the role of the European Court of Justice, which the UK wants to remove from enforcing elements of the protocol. Oversight of the ECJ is a red line for the UK and an area that the EU have to provide next to no compromise with. Therefore, the decision on the role of the ECJ will be crucial as to whether progress on talks has been made or not.

WHAT IF TALKS FAIL?

Should talks fail, Article 16 is likely to be triggered and checks across the Ireland board is suspended, which in turn would threaten the integrity of the EU single market. Subsequently, the UK can be expected to face a retaliatory response from the EU, raising the risk of an all-out UK-EU trade war. Much like the Brexit saga, it seems that tensions will get worse before the light is reached at the end of the tunnel, therefore, political risk premium is likely to be on the rise for the Pound, meaning that the currency’s sensitivity to headlines will increase.

That being said, I would recommend following my curated Twitter list, to help on top of the latest UK politics, while also on occasions providing a speed advantage. The example showcases how efficiently using Twitter can provide an edge to short-term traders.

During the Brexit saga, the first point of communication for many political correspondents had been via Twitter. This meant that traders who followed high ranking journalists that typically received the latest scoop from the halls of Westminister had a speed advantage over BBG/Refinitiv owners. The example below shows one of many occasions where Twitter had been quicker to report breaking Brexit news. Of course, the risk was the authenticity/reliability of the headlines, however, this was largely dependent on the journalist who tweeted the report. 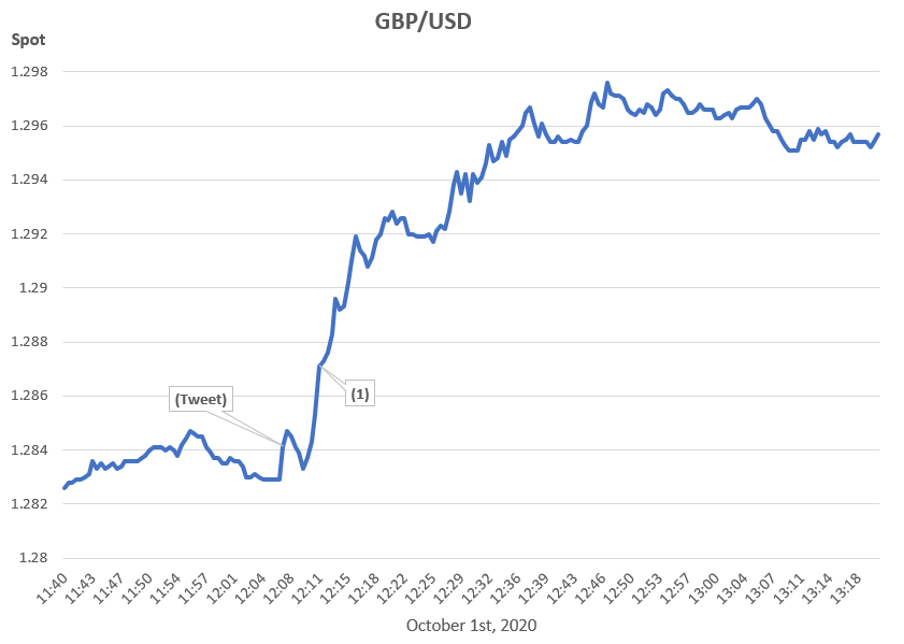 FX Week Ahead - Top 5 Events: UK Jobs Report; US Retail Sales; Inflation Data from Canada, the Eurozone, and the UK

Inflation pressures are no longer being dismissed as transitory by markets, which means three of the four inflation reports due this week have a high likelihood of producing volatility in markets.

Why COP26 Matters for Markets

Against the backdrop of rising energy prices leading to economic fallout for economies in Asia, Europe, and North America, COP26 is set to begin on October 31.