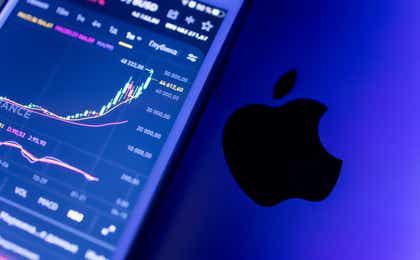 It’s been a strong start to Tuesday trade and that’s really an extension of a late-session ramp from yesterday. Into the noon hour ET yesterday, both the S&P 500 and Nasdaq 100 were still hanging around key supports. But after lunch a ramp began into the close, and the overnight session was punctuated by a massive ramp that, at this point, hasn’t yet retraced.

At the core of the move is a mixed bag out of China. On the negative side, it sounds like an Evergrande default may be soon in the offing. But, on the other hand, it seems that China is finally going to open the stimulus spigots following yesterday’s reserve requirement cut. This answers the question as to whether the Chinese regime will support the ongoing saga around Evergrande (and other property developers). Initially, it appeared as though the government was resistant to supporting the situation for the simple reason of incentivizing such risk taking. But the recent moves suggest that China is going to stoke ahead of the Winter Olympics, set to be held in Beijing in just a few months, it makes sense as to why the Communist Party might want to avert a wide-scale economic issue.

So, while there is still some fear around U.S. economic policy, with the door seemingly open to a continued hawkishpush from the FOMC, with perhaps even a faster wind down to asset purchases than initially expected; this is somewhat offset by a show of support from the world’s second largest economy.

On the headline side, Apple gapped up and jumped to another fresh all-time-high this morning. There’ve now been two consecutive days of sizable gaps, with Monday’s gap at 1.5% and this morning’s gap at over 2%. As I discussed last week, there’s a lot of positive items around Apple at the moment, with the recent announcement of an electric vehicle expected to arrive in 2025 doing much of the recent driving in this current breakout.

But, this is a very overbought scenario at the moment as there’s likely a lot of longs looking to take profit should the stock start to show weakness.

The Nasdaq 100 found support last Friday at the 50% marker of the October-November major move. That level is at 15,567 and it came into play again on Monday morning, showing a higher-low.

At this point the index is more than 4.5% from that support hit, an admirable run for a very short period of time. And prices are now at the 61.8% Fibonacci retracement of the recent pullback move, highlighting continued bullish potential. For that topside trend to hold, buyers would need to hold support above the confluent area between 16,152 and 16,201.

If this zone cannot hold, then we may have a greater gap-fill scenario on our hands, and that can extend down to the confluent zone that was last in-play yesterday afternoon, taken from around 15,828 up to 15,850.

While near-term momentum has been decisively strong, this is a very fast change from what was stacking up to be a very bearish backdrop just a week ago.

Not only were Omicron fears in the headlines, but there’s also a noticeable pivot at the Fed that appears to very much be on the way. This Friday brings inflation data into the mix and the expectation is for a whopping 6.7% headline print. And then next week brings the Fed, where many are expecting the bank to make a pivot into a more-hawkish stance, with possibly faster asset purchase tapering along with warning of more rate hikes for next year.

A week ago these risk factors were seemingly weighing the market down and yesterday’s move very much appeared like a short-covering rally. Today’s move, of course, extended that theme, but for those looking to operate with these themes, risk management remains paramount, as this recent move illustrates prices can extend for a considerable amount of time.

For those that would like to fade this recent rip, one possible candidate of interest is Ark Innovation. The Cathie Wood-led vehicle has had a rocky 2021 after a very strong 2020, with the stock down 44% from the 2021 high to low.

At this point, the stock has bounced back up to the psychological 100 level, and for those looking to fade this bounce, that can remain a theme of interest, near-term. 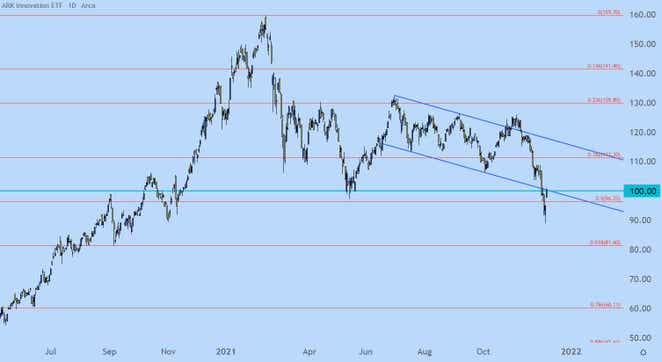 After such an incredible post-pandemic and post-Great Financial Crisis run for ‘risk trends’ it is almost unfathomable to consider a top. Is it possible the extended retreat in the Nasdaq 100 and other risk measures through this past session signals the move?

Treasury Secretary Janet Yellen dropped an important comment yesterday on the topic of inflation, and rates have been running higher ever since.

Are we nearing a major market turn as inflation prints beyond expectations? If so, gyrations inside of US equities may be showing us something. Markets have a tendency to move in cycles. Sure, the day to day give and take can create impactful moves in price action but, over the long-term, cycles have a penchant to hold as human emotion plays a role in a market’s performance, just like the Fed and interest rates do. Read more from James Stanley.